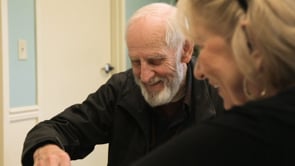 Every day set aside for recognition of an event or a group will have two sides, celebration and contemplation. We’ve just celebrated our great day of Independence, for instance, which also marked the start of war and struggle. Time passes, the Day accumulates meaning and significance, and the whole effect is that it indeed is worth recognizing, and the meanings multiply.

World Senior Citizens Day is such a day. The global community, via proclamation by the United Nations, celebrates the day, as we do our National Senior Citizens Day on August 21. Actually, the United States historically precedes the other nations in its formal recognition, having adopted a resolution put forward by President Ronald Reagan in 1988:

“Throughout our history, older people have achieved much for our families, our communities, and our country …. With improved health care and more years of productivity  … older people are embarking on second careers, giving younger Americans a fine example of responsibility, resourcefulness, competence, and determination … Wherever the need exists, older people are making their presence felt—for their own good and that of others .…”

Senior Citizens Day reveals its dual nature of celebrating the achievements and contributions of older Americans and seniors worldwide, as well as raising the consciousness about the negative effects of age on health and just how far we have to go in seeking therapies and greater public understanding.

A Sea Change in Attitude About Aging

Ronald Reagan’s campaign may have been the first in which a candidate’s age (69 at the time of his first campaign) was made an “issue” of outsized proportion. Reagan is famous not for sidestepping the matter of age, but for making it an admirable attribute. There was the now historic response to the question about his age versus that of his opponent, Walter Mondale, during the 1984 Presidential Debates: “"I will not make age an issue of this campaign. I am not going to exploit, for political purposes, my opponent's youth and inexperience … ” Even his opponent could not repress a laugh. So, it may be especially appropriate that Reagan was the President to advance the national day of recognition for older Americans.

The later life of President Reagan shines a light on the dual significance of the day. His post-Presidency years were marked by a long period of Alzheimer’s after his diagnosis at age 84, six years after he left office. Alzheimer’s and other types of age-related dementia had only recently begun to be widely studied and illuminated by some understanding, instead of merely lumping them into the category of “senility.” The former President’s condition probably had a lot to do with accelerating the modern search for serious answers about dementia and the effects of aging and for changing the very way we talk about age.

At Legend Senior Living, we embrace this day of recognition for seniors as a wholly good thing. Any occasion that increases sensitivity to age as having its joys and its challenges, and to people with dementia as people, not “patients” – we’re all for it. By the way, we prefer to call ourselves seniors rather than senior citizens – and there are plenty of us at senior age in the Legend organization – because the outmoded “senior citizens” tends make a separate class out of people who live along the same continuum as anyone else. You may on your next birthday be eligible for the senior discount at the movie theater, but you’re standing in the same line you were the day before, and nobody insists that you join their Senior Citizens Club.  We’re being lighthearted here, but seriously, to us the changing attitudes about aging are more than a topic of current fashion and political correctness

Before Assisted Living and Memory Care, or for that matter, Independent Living, the line between “prime of your life” and “old” was clearer and accompanied by the looming move out of the family home and into “the” home, a nursing facility. Legend in its pioneering of Assisted Living rejected this characterization as artificial, arbitrary and counterproductive to a vibrant life that could have joyful decades ahead of it.

“Know Again” the People You Have Yet to Know

We don’t need to cite the names of elder statespeople and people of the arts to find examples of accomplishments in the senior years. You can cite plenty among your own family and friends. “Achievement” is in the eye of the beholder, and landmark accomplishments or none, every person deserves independence, dignity, purpose and a vibrant life.

The important thing is to pause and recognize. “Re-cognize,” comes from a Latin word meaning literally to “know again.” So, we might ask ourselves, in addition to cards and flowers, what are we truly doing to “know again” the generation that has led us? For one thing, at Legend, we find it very difficult to think of the residents as having crossed into a “third age,” because we don’t have special way of speaking to them, other than being respectful, friendly and loving. And they would find it odd if we did. Because we see a person on a continuum of age longer and richer than most. We are they; they are we. Their message is that “You have yet to know how great life is, great in the sense of beauty and pain both, embracing its fullness.” With added benefits from being older, not the least of which is not worrying about things, not always having your head in the future or the past, but right here, right now.

Often we get too far into convincing ourselves that we’re teaching the seniors to deal with age, only to find that they are teaching us. If we’re listening. What we can do is help to improve health of the whole person, physically, mentally and spiritually. This recognition day becomes useful, then, like all days of recognition, to remind us to “know again,” perhaps know for the first time, the gift of aging.