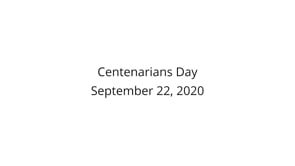 Ask A Centenarian: A Long Life Is What You Make It

What piece of U.S. history will you remember most when you’re 100 years old? America has certainly had a rich, robust history. And whether you’re a history buff or not, you have to wonder at the life of a firsthand witness to 100 years of it. There’s a profound difference between reading about a hundred years of history and drama and experiencing it firsthand. The tragedies of a Great Depression and a World War, the advent of talking pictures, the golden age of radio and the invention of television, innovation of air travel, all the way to the exploration of space and the digital revolution – all in one lifetime. It’s those very witnesses, those who can use their experiences to share wonderful stories and advice, whom we recognize on September 22, National Centenarian’s Day (those Americans who have lived 100 years or more).

At Legend Senior Living® we’ll be celebrating with the centenarians, with each residence in the Legend family having their own unique events, much storytelling, and capturing video and pictures along the way.

Legend residences are home to dozens of centenarians. One of the pillars of our mission at Legend Senior Living is Life Enrichment. Having an engaged life through purposefully designed activities is certainly one of the primary reasons people move into a senior living residence. We think of the lives of residents as being one of the greatest resources of Life Enrichment for others with lively stories, friendships and memories. So, the centenarians among us offer particularly rich lives of experience to share. And share they do.

We figure that one of the blessings for a centenarian is being asked over and over, “What’s your secret to longevity?” Fortunately for us, the 100-years-plus residents have great insight and sparkling good humor when being asked this and the other perennial question, “What do you remember most?”

Clara Williams, a Legend of Lititz, Pennsylvania resident, at 102 remembers “the Great Depression, dealing with hardship, poverty and shortage of food.” The Depression times, the Dust Bowl days in the Midwest, and struggling to put food on the table are common memories among centenarians. It tends to put current times in perspective when the most indelible memory of someone over 100 years old is something that happened 80 to 90 years ago.

The youngest of the centenarians were born in the immediate wake of World War I and the Treaty of Versailles, which ended it in January 1920. So, most were still youngsters during the Roaring 20s, when the country cut loose in Post-War revelry (despite the Prohibition of alcoholic beverages) and wild market speculation.

"The crash came after 1929. That was horrible,” remembers Beverly Clute, a resident at The Regent of Wichita, Kansas, who turned 100 in August. “There were rations on so many things, even sugar. We just didn't have any money. My dad had a job at a packing plant, but his paycheck was reduced. He was able to get us meat at a discounted rate. We also had a large garden so we never went hungry. On Christmas Day, 1942, I was set to get married in my church, but there was still a gas shortage, so there wasn't any heat. We had to get married inside my home instead!"

The memories of World War II loom as large as the Depression, especially for those who were in the fight. Many veterans of the war can recount stories as vivid as any wide-screen film. Coming right on the heels of the Great Depression, the war years would earn this generation the name The Greatest Generation.

You know how you can remember exactly what you were doing when you got the news of some shocking or significant event? Harold Feyh, our most senior of centenarians at 105, lives at Legend at Capital Ridge, Topeka, Kansas, and remembers the attack on Pearl Harbor, “I was with my family on the way to have Sunday dinner with friends when we heard on the radio what happened. I will never forget that."

Elizabeth Hittson, 100, at Rock Ridge, Rockwell, Texas, describes her memory of being part of the first group of women in the Navy during WWII, the WAVES (Women Accepted for Volunteer Emergency Service). Warren Schmitt, a resident at Legend of Hutchinson, Kansas who will celebrate his 100th next spring was at the Battle of the Bulge in Belgium. He was also one of three living survivors of the infamous Malmedy Massacre, where the enemy guards were ordered to kill all American POWs and left only a handful alive. Having lived through such a nightmare, Warren offers what seems a rather relaxed philosophy of living a long life: “Take it easy. Don’t overdo it.”

A resident of Legend at Rivendell, Oklahoma City, Lieutenant Colonel Edward Zalko (Ret.) also remembers fighting in the European Theater during WWII, but also recounts charting the first manned flight to the moon. How to live a long and happy life? “A good game of golf.”

There are plenty of happy memories, too, and bright periods in our history. None of these residents look back only on the trauma of hard times. Quite to the contrary, they have an extraordinary will to be joyful and to share it.

Leeta Lankford, 101, at Rivermont Independent Living, Norman, Oklahoma remembers when Charles Lindberg made the first Atlantic crossing by air in the Spirit of St. Louis to Paris, France.

John "Jack" Turner, 102, at The Regent in Wichita remembers a trip to the Chicago World's Fair 1933 and says of his long, healthy life, "You need good genes to start with!"

A mixture of faith and love of life dominates the recommendations of these centenarians for how to spend your days. Bob Hunter, 100, a U.S. Navy WWII veteran and resident of Legend at Rivendell Memory Care suggests, “Spending as much time as possible with rod and reel in hand and having a relationship with the Lord.”

Some say don’t marry. Others say do. Clara Williams attributes a long life to "A long, successful marriage and a family." Some stress a positive outlook. Others say “Go for it!” Like Carmen Rodriguez, who will soon turn 100 at Legend of Hutchinson: "Being ornery is the key to life. Just ask me – I am the boss of it!"

One more thing this individually diverse group shares: the ability and patience to listen to the experiences of younger people. Take advantage of it. We’ll honor these and all centenarians on National Centenarian’s Day. We hope you do, too. By the way, supercentenarians are those who have exceeded the age of 110. Hester Ford, as of this writing, is the oldest person living in the United States, aged 115. We wish her well and all of our centenarians a Happy Centenarian’s Day!